To celebrate Coming Out Day, we will be sharing coming out stories by three members of our community. 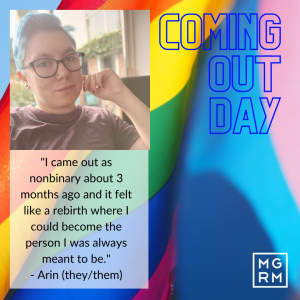 “I came out as nonbinary about 3 months ago and it felt like a rebirth where I could become the person I was always meant to be. From my work to my parents, I’ve felt loved and accepted most of the way through and I’m immensely grateful for the people in my life. My mum even bought me pronoun pins to wear when I go out! Since coming out, I’ve had a new lease on life. I started going to queer meetups and talking to people, I went back to uni for psychology to eventually become a therapist for other trans people, and I’ve felt much happier. I was afraid that coming out as a nonbinary trans person would cause problems and confusion, but surprisingly it’s been so lovely to just receive “oh, okay” responses. If anyone’s thinking of coming out and it’s safe enough to do so (especially if you’re trans), it will unlock so many other things for you and allow you to truly start the rest of your life.” 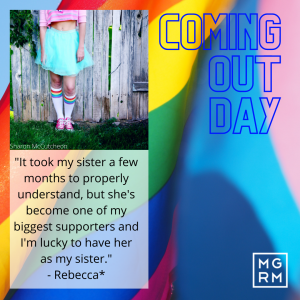 “I knew I was trans for a while, but hadn’t really done much aside from tell a few people. Living with my sister meant that I had to tell her, if I wanted to start being honest with myself at our flat, so after a lot of thinking it over, I went into her room. I mumbled something about being a girl, and she suddenly got serious and asked me for how long I’d felt like this. She was taken aback, and needed some time to process it, but she was glad I could trust her, and excited to finally have a sister. It took her a few months to properly understand but she’s become one of my biggest supporters and I’m lucky to have her as my sister.” 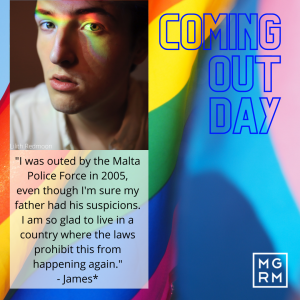 I started gradually coming out to friends back in 2003 and living more openly in 2004, and while Malta was very different back then, I was lucky to have supportive friends back then, and I managed to find LGBT friends very easily.
In 2005, a member of the Malta Police Force told my father, even though I’m sure he had his suspicions beforehand. These days, I am so glad to live in a country where the laws prohibit this from happening again. I remember when my father asked me to confirm this, he asked me why I haven’t told them (him and my mother), and I expressed fear of being kicked out of home or not being accepted. My reply drove him to tears, and he said he was hurt that such a thought would even cross my mind. It was the first time I’ve seen him cry, and I was 15 back then. Since then, our relationship has been gradually getting better, and the older I got, the closer we’ve become.”

*Names have been changed