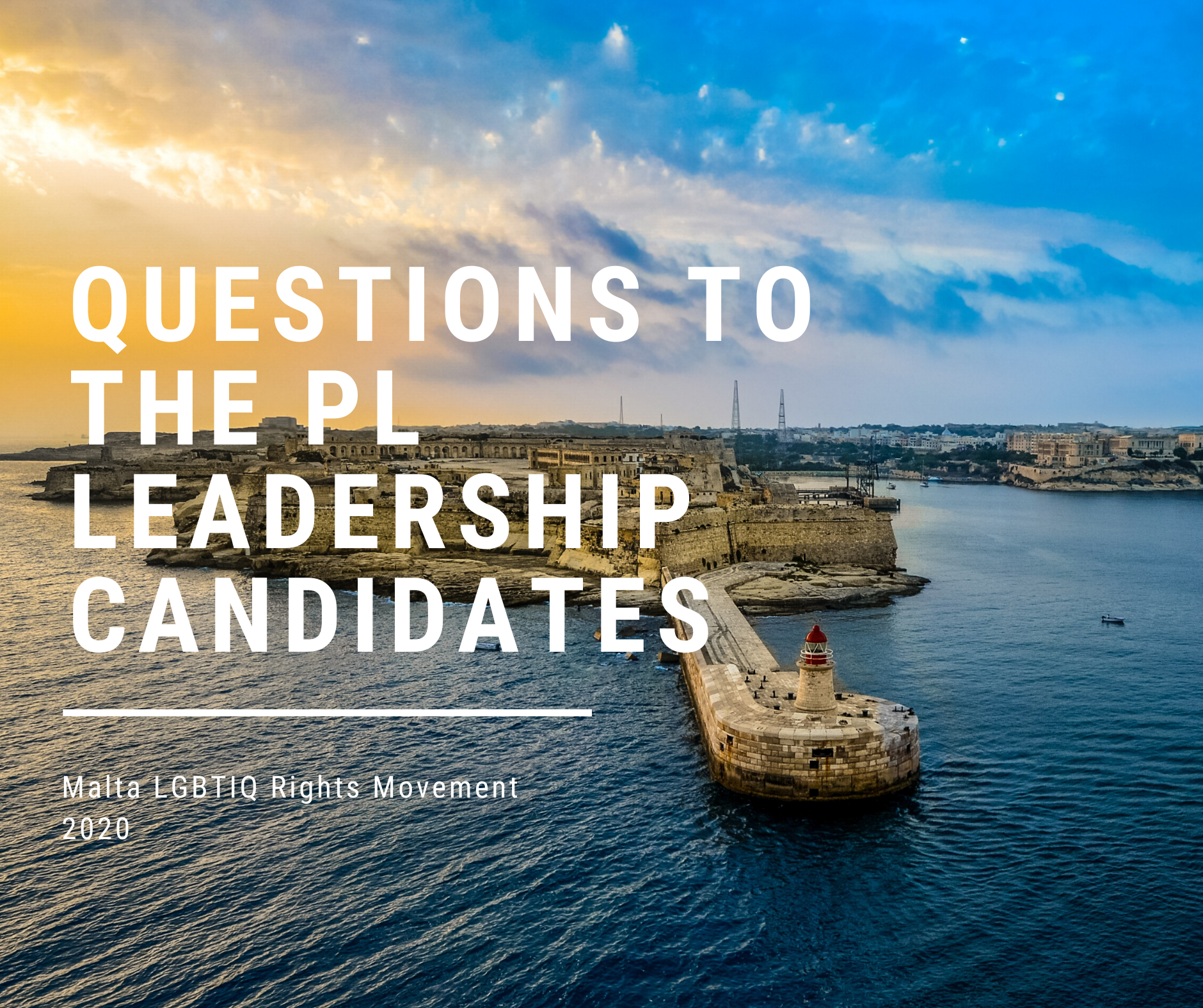 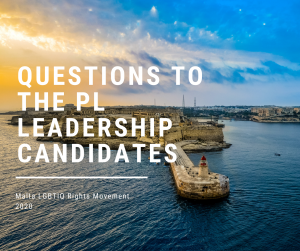 For the past twenty years, the Malta LGBTIQ Rights Movement (MGRM) has worked hard for the achivement of several civil rights, most of which were achieved in the past few years. As a result of the change in leadership of the Partit Laburist, and therefore the position of Prime Minister, rights such as marriage equality, equality in adoption laws, the right to change name and legal gender, the right to treatement for trans people, and in a general sense, equality in the eyes of the law, could be threatened.

For this reason, MGRM invited the Hon. Chris Fearne and the Hon. Robert Abela, as the two candidates for this position to set the record straight, and answer an identical set of questions related to the above.

The two candidates were made aware that their responses were going to be published on our website as well as on our social media pages.

We would like to note that both the questions and the answers were made in Maltese. Although the responses were professionally translated into English, please refer to the original language in case of any ambiguity.

[EN] – MGRM – Questions to the Candidates

When professional dancer Chakib Zidi landed in Malta in August 2017 as part of a European tour, he had no idea he would not be able to leave.

The 29-year-old is gay, something that is deemed illegal in his home country of Tunisia and is punishable by up to three years in jail.

He is among an undisclosed number of people seeking asylum under Malta’s Refugees Act based on fears their sexuality would result in degrading treatment or punishment in their country of origin.

“While I was working in Malta two years ago, I received an urgent message from my sister and lawyer via Facebook that my house in the Medina area of Tunis was being raided by the police,” he said.

Since then, Chakib has been trying to find out if he will receive international protection.

He and his partner, theatre director Mohamad Ali ‘Dali’ Agrebi, who is also from Tunisia, live in Fgura with their dog Bobby. They are among a growing group of asylum seekers who are choosing to live openly gay.

“We are very happy here but are still living in a kind of limbo,” continues Chakib.

“Dali got his visa six months ago, but I am still waiting to receive international protection. This means I can’t travel, get a driver’s licence or even open a bank account. I feel a bit trapped as I can’t visit my family or friends. It also holds me back when it comes to accepting work abroad as a dancer or choreographer as I can’t leave.”

While Malta ranks first place in the International Lesbian, Gay, Bisexual, Trans and Intersex Association (ILGA) index as Europe’s best country for LGBTQ+ law and policy, life is more difficult if you are a migrant or refugee.

According to the latest information from the European Fundamental Rights Agency, many gay people who are discriminated against for their ethnic origin or religion don’t bother reporting violence or hate speech.

“Yes, I wish I was born heterosexual but there is nothing I can do about that. It’s not my fault. I feel betrayed by my country but all I can do is hope that I can get official status soon so that I can move forward with my life.”

Despite this, Chakib and Dali feel they are among the lucky members of Malta’s migrant and asylum-seeking gay community. For this reason, they are working closely with Malta’s LGBTIQ Rights Movement (MGRM) in Mosta to help those struggling.

“It has shocked me to hear what some people have gone through since arriving in Malta,” says Chakib.

“One man – who was living in Ħal Far – says he felt very threatened there. He had no idea it was legal to be gay here and thought it only happened in places like the US. When he came out with us to places like Paceville, he couldn’t believe the bouncers allowed him into clubs when he was with us, because when he tried before he was turned away as he was black.

“We took him with us to gay events such as Pride and Lollipop and he was so happy.”

Dali, 26, says there is not enough help for vulnerable gay people who end up in Malta.

“We hope to set up a space just for migrants and plan to meet so people can be informed about the rights and laws they have here, as well as sexual and mental health services because they vary from country to country,” he said.

Alex Caruana, who works as a Community Outreach Officer, also at MGRM, agrees with Dali.

He says that some gay migrants face the double challenge of not being accepted because of the colour of their skin and sexuality.

“Often a person’s experience depends on the social-economic class they fall into, within Malta.

“For example, if you are in the arts community you might be OK. But if you are a gay, poor, black man working on a construction site, you are probably going to have a harder time,” he said.

Trying to find out exactly how many people are seeking asylum in Malta because they are gay is difficult – but this is something Dali feels also needs to change.

“It’s so hard to get the numbers and, when we ask, we are told it’s confidential. But if we knew more facts, I think it would be easier for us to know who we should reach out to and help,” he said.

Despite often being referred to as one of the world’s friendliest and safest countries, particularly in relation to the LGBT+ community, Malta still has a lot to learn about gender identity. There’s still a bit of a taboo and a level of stigma surrounding the trans community and the notion of gender fluidity.

One Maltese organisation is setting out to change this.

TRANSformazzjoni is a documentary that provides an insight into Trans peoples’ everyday lives in Malta. The documentary puts a spotlight on 5 Maltese Trans people from different walks of life giving full visibility to a wide range of people in the local Trans community, which all represent their own section of Maltese society that different people can relate to.

Directed by Olwyn Jo, known for her involvement in many local productions and music videos, TRANSformazzjoni will give viewers an insight into life as a member of the Trans community in Malta.

It follows the daily lives of Alex, Brenda, Lee, Reb and Roasrio; five local individuals of varying ages who identify as Trans*.

*The general definition of transgender is as follows; denoting or relating to a person whose sense of personal identity and gender does not correspond with their birth sex. However, an individual’s gender identity is best only explained by the individual themselves. This will be further explored in the documentary, too.

TRANSformazzjoni will also serve as an educational tool, featuring the recent laws and policies directed to enhancing the lives of Trans people in Malta

You can catch the premiere of TRANSformazzjoni on the 7th of June at 7pm at the University of Malta, Valletta Campus. To book a place at the premiere, email or message them on Facebook. And keep an eye out on their socials for more information on where to catch the documentary after the premiere. 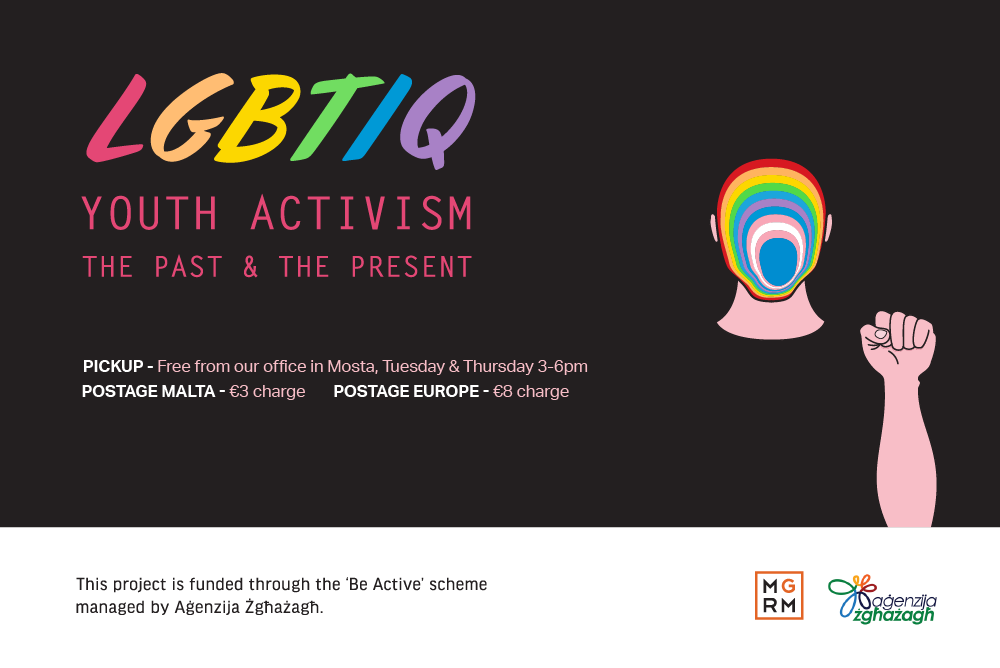 In summer 2017, the idea of a short narrative of the experiences of a number of activists from the LGBTIQ community came about due to a common desire to explore the history of LGBTIQ activism and the importance of activism within the community itself and society at large.

Nine interviews were conducted with the people who were pioneers of LGBTIQ activism; those who started the fight for LGBTIQ rights. This was important to get to know their stories and perspectives in relation to activism.

Twelve interviews with the younger generation of activists, those who will determine the future of the LGBTIQ movement were carried out also. The book describes the rewards of activism as well as the challenges one might encounter along this journey.

The purpose of this project was to inspire the young and not so young to engage in activism and to stand for what is right no matter what, as the activists recall their beginnings, with the hope that the publication serves as a point of reference in the setting up of other youth lead organisations and encourages young people to get involved.

The publication was possible thanks to the funding and support of Aġenzija Żgħażagħ’s ‘Be Active scheme’ which enables the engagement and participation of young people as well as organisations.

from our offices in Mosta, 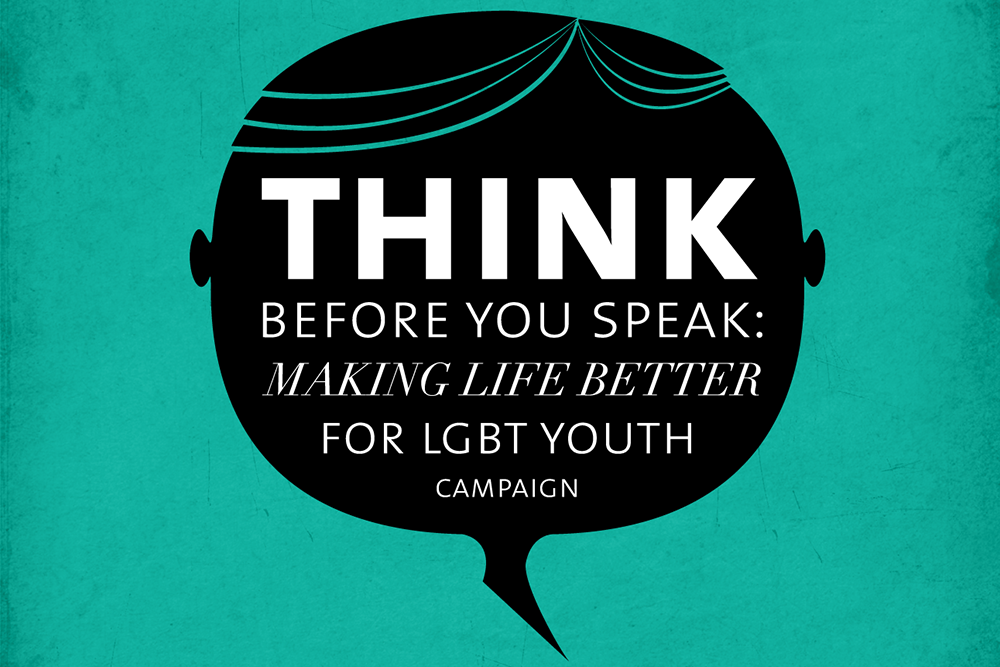 This project, funded through the Voices Foundation aims to address the difficulties encountered by lesbian, gay, bisexual, transgender and questioning (LGBTQ) youth related to the recognition of their sexual orientation and/or gender identity in a society that may not always be eagerly willing to accept difference.